Man of Many Talents

Read our review of Renaissance Man by Chris Altmann

Australian singer/songwriter and now Canadian-based Chris Altmann doesn’t need a lot of friends or colleagues when it comes to making a record.  He can turn his able hands to most things musical.

I wrote about this prodigy upon the release of his debut 2012 album Que Paso.

Now, I’ve seen Chris perform several times.  As far as I recall, on those occasions he has played electric and acoustic guitar, banjo, mandolin and piano.  Here he is again, with his third solo album Renaissance Man (on Ridin’ High Records).  His instrument of choice with this new release is now the pedal steel guitar, which is a critical ingredient on this collection.

There are ten tracks presented here.  The playing roster includes Rob Wells (drums), Ty Price (electric guitar on one track) and backing vocals from Suzy McNeil on three songs.  As per the liner notes Chris Altmann “is on everything else, especially the steel”.  Chris also produced the album.

The songs on Renaissance Man were written between trips to Nashville and recorded at his home in Canada.  The Altmann loose-limbed style is evident here.  It is not exactly low fidelity, but it does have a fresh and ‘lived-in’ quality to it, reminiscent of Bob Dylan/The Band on The Basement Tapes (although minus the latter’s whimsy). 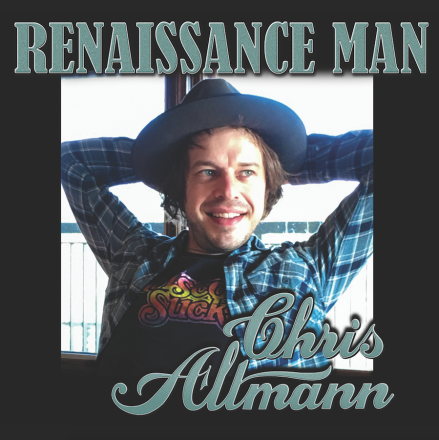 A Nashville songwriting residency in 2013 resulted in the self-deprecating and good-humoured ‘Good Morning Mr. Coffee’ which is an excellent country rock starting point and provides early evidence of his pedal steel abilities.  The title track is early rock ‘n’ roll complete with Little Richard high-pitched ‘oohs’!

‘Believe Me’ (a song co-written with Emma Swift) takes things up a notch, a plaintive and soulful tale with a lithe and easy jamming backbeat.  ‘I’m Not Concerned’ is  traditional country.  I was lucky enough to see Altmann preview ‘Darkness and the Light’ in Nashville in 2014, as part of the Americana festival.  The album version is a triumph – gospel-tinged and immensely engaging, a striking and instructive song.  ‘When I Lay My Hammer Down’ is a song about death – a topic that always get our attention – and is subdued, building into an emotional crescendo.

‘Honeymoon Stage’ is inspired by Ray Charles in vocal delivery and phrasing, while ‘I’ll Take A Chance’ is a well-appointed, loping love song.  Proceedings close with the guiding and agreeable ‘Mother B Goode’.

There is plenty to embrace in Renaissance Man.  The album showcases Altmann’s maturity as a songwriter, with well-assembled tales of personal loss and adopting change.  The arrangements and production values are clearly on display and there is that sense of awe as to his playing talents, which seem to be ever expanding.  A forceful release.

Chris Altmann returns to Australia to present his new album:

Read our review of Renaissance Man by Chris Altmann