Available May 26 on Signature Sounds 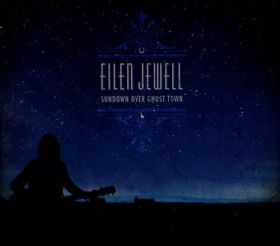 Velvet-voiced songwriter Eilen Jewell has been prolific.  By my count, six original releases from 2005 to 2011’s critically-acclaimed Queen Of The Minor Key, then a double CD Live At The Narrows out in 2014.

It’s been a four-year hiatus since the last studio album.

What has Jewell been up to?

Well, plenty.  She has welcomed her first child Mavis (named after gospel legend Mavis Staples), moved from Boston back to her home town of Boise Idaho and has been working on the new album, which is perhaps her most personal and vivid to date.

The songs contained herein were written north of Boise in the mountains of Idaho and is likely the most emotional writing of her career ‘ songs filled with evocative imagery, personal reflections and acute observations on life as a mother.  All songs were written by Jewell and the players are her regular, tight road quartet – husband Jason Beek (drums/vocals), Jerry Miller (guitar, mandolin) and Johnny Sciascia (upright bass).  Additional support on the record is from Steve Fulton (Hammond organ and piano), Jake Hoffman (pedal steel) and Jack Gardner (trumpet).

In the past her material has been a distinctive and enticing blend of early blues, 60’s rock ‘n’ roll, western swing, rockabilly and surf twang.  Sundown Over Ghost Town stretches these ingredients over its twelve songs.  Jewell says “I’m more comfortable in my own skin, have a clearer sense of who I am and the kind of music I want to make”.

It’s a wide-angled lens used here and greatly enhanced by the players’ collaboration.  “Worried Mind” is the album’s easy opener, a joyful anticipation of a lover’s return with Miller’s electric guitar and the pedal steel of Hoffman prominent.  The wistful “Hallelujah Band” has Jewell’s vocals perfectly in the spotlight – again it’s hard to imagine the song without Miller and Hoffman, the interplay between them is special.  “Rio Grande” has a strident mariachi trumpet and sensuous percussive beat, an engaging song of regret and caution:

And my hard luck hand

“Half Broke Horse” is more rustic, a poignant tale of an outcast, hard luck, rejection and its implications.  “My Hometown” sounds like it could possibly come out of the Billie Holliday catalogue, with those ideally winsome vocals.  But it feels different – a new mother’s song about feeling loved and supported, thinking about family, closeness and a fresh and positive look at the world, through a new window of love.  Sublimely beautiful, a high point here.

“Needle and Thread” is less intense, a pretty country vibe with the profundity of the lyrics and arrangement lifting it beyond the ordinary.  “Down The Road” is a light boogie with a catchy chorus and a keyboard which is fearsomely sparkling.  “Some Things Weren’t Meant To Be” has a Neil Young-“Helpless”-feel about it, while the pace quickens for “Pages”, a twanging honky tonk tune with again Miller’s masterful guitar cutting a swathe through proceedings.  “Green Hills” is about rural decay and money talk:

Sink down into wasteland

They leave you alone

To hide your face in the sand’

“Here With Me” is like an early blues standard, well-developed vocals interplay with Miller’s guitar – a complete delight.  Get on to the dance floor with your loved one for this one.  The closing “Songbird” is a positive ode about the potency of music and its ability to uplift and guide us – ‘take the sad out of the blue, songbird what would I do without you’.  If you listen closely here you might just hear some vocals from one Mavis Beek.

Sundown Over Ghost Town has Eilen Jewell back and personal.  And we are the better for it.  It’s a pleasure to bear witness to her craft.