Another Day Another Time, Various Artists – A Review 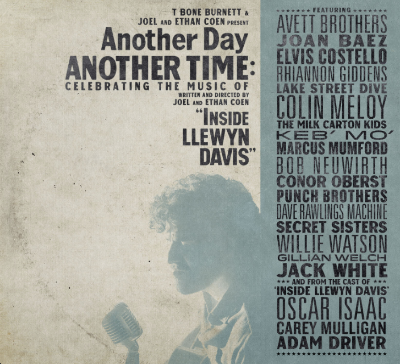 This site is turning into a shrine to super producer T Bone Burnett.

The last three new albums that I have come across – The Phosphorescent Blues by Punch Brothers, Rhiannon Gidden’s Tomorrow Is My Turn and the subject release of this article – have all been produced (in part or in full) by Burnette.  All three albums are out on Nonesuch Records and are all excellent.

Another Day Another Time: Celebrating The Music of “Inside Llewyn Davis” is a live recording from a one-night-only concert at Town Hall in New York in September 2013.  The two-disc set was produced by Burnett and Joel & Ethan Coen (writer/director/producers of the movie) and features live performances by icons and the cream of rising stars of the folk and Americana scene.

The evening was filmed for a documentary that was broadcast by Showtime, and now Nonesuch has released a live recording of the concert on CD.  And what a live event it must have been – Punch Brothers, The Avett Brothers, Joan Baez, Elvis Costello, Rhiannon Giddens, Lake Street Dive, Colin Meloy (The Decemberists), The Milk Carton Kids, Keb Mo, Marcus Mumford, Conor Oberst, Dave Rawlings Machine, Gillian Welch, Willie Watson (ex-Old Crow Medicine Show), Jack White and others join forces with some of the cast of the movie – Oscar Isaac, Carey Mulligan and Adam Driver.  Mix this hot-shot group with some of the most evocative traditional songs, material from Woody Guthrie, Bob Dylan, A. P. Carter, Tom Paxton, Tom T. Hall and Ian Tyson and you have a treasure trove of the best roots music on offer today.

Some personal highlights for me here are “Tumbling Tumbleweed” by Punch Brothers, Gillian Welch’s beautiful renditions of “Will The Circle Be Unbroken?” and “The Way It Goes”, “New York” (Milk Carton Kids), Oberst’s “Man Named Truth”, “Blues Run The Game” (Meloy), The Avett Brothers’ interesting take on “That’s How I Got To Memphis” and Giddons’s breathtaking “’S iomadh rud tha dhìth orm / Ciamar a nì mi ’n dannsa dìreach”.

It is indeed a celebration and the recording quality is perfect.  If you are into folk, new folk, Americana and/or simply the best in the current legion of singer-songwriters, you should add this wonderful release to your collection.  It contains the very essence of the best of traditional music while showcasing the marvellous talent of a group of new-comers.

A full track list for the two-disc recording follows.

As Burnett explains, “Inside Llewyn Davis was filled with live performances of some of the folk songs that had survived the McCarthy hearings.  Some of the songs were a hundred years old; some had just been written but sounded a hundred years old.  In order to get attention for a film that was not exactly on the beat we decided to throw a concert featuring the actors and musicians who had performed in the movie and on the soundtrack.  We also invited members of the extraordinary community of musicians who have coalesced around this old music—and have kept it alive in the wake of the most recent technological revolution—to join us that night.

We asked them to perform an old song and one of their new songs.  He continues, “Several new stars emerged from their performances that evening—The Secret Sisters, Lake Street Dive, The Milk Carton Kids, Rhiannon Giddens, and Punch Brothers all proved themselves as good as the best as they took the stage next to Hall of Famers Joan Baez and Elvis Costello, and established younger artists like The Avett Brothers, Colin Meloy, Marcus Mumford, Conor Oberst, Willie Watson, Gillian Welch, and Jack White.”

Huffington Post called Another Day, Another Time “one of those only-in-New-York events,” while Rolling Stone said it was “a bustling salute to the sounds and the idea of Sixties folk music,” and continued, “For all the formality of the night, which was exceedingly well-paced and organized, the concert recalled a time when one or two people, bearing one or two unplugged instruments, could be as enthralling as the greatest rock or EDM [electronic dance music] track.

3. Will the Circle Be Unbroken?
(A.P. Carter)
Gillian Welch

6. I Hear Them All | This Land Is Your Land
(David Rawlings/Ketch Secor | Woody Guthrie)
Dave Rawlings Machine

15. All My Mistakes
(Scott Avett/Timothy Avett/Robert Crawford)
The Avett Brothers

16. That’s How I Got to Memphis
(Tom T. Hall)
The Avett Brothers

12. Which Side Are You On?
(Florence Reece)
Elvis Costello & Joan Baez

15. I Was Young When I Left Home
(Bob Dylan)
Marcus Mumford

“[The concert] illustrated how contemporary musicians have advanced the genre … It did so beautifully with a sense of joy conveyed with ease by three generations of considerable talent.” —Wall Street Journal“Some of the most transcendent folk music performances we’ve seen in ages … It was a tribute to the folk music pioneers of yesteryear, a celebration of folk artists killing it today and a preview of the innovators who are about to reinvent the genre for ensuing generations.”—VH1