Joe Bonamassa and His Different Shades Of Blue 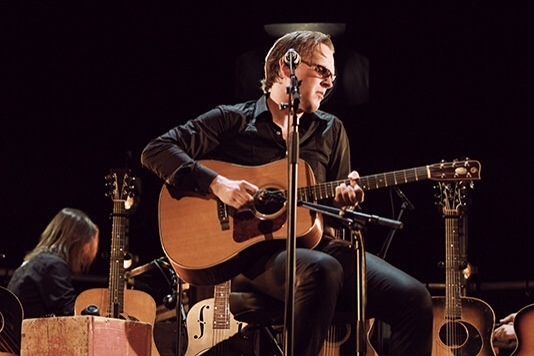 Blues and blues/rock music for me can be a mixed bag.  The reliance on classic and hallowed material, the oft-repeated riffs and hooks, the over-masculinity and the lyrical strictures sometimes can lack a freshness.  Gary Clark Jr has turned the genre on its head with a new style and approach.  Joe Bonamassa is another artist that has avoided the aforementioned pitfalls.

GRAMMY-nominated Bonamassa has announced that his brand new solo album Different Shades Of Blue (J&R Adventures) is to be released first in Australia on September 12 2014 and September 23 2014 in other parts of the world.  This is Bonamassa’s first studio album in two years and the first album of his career to feature all original material.  The result is a record with more of an experimental edge than previous records. It’s a blues record that explores the outer reaches and the many different sounds that shape the genre.

“It’s been a while since I’ve been involved in the writing on an entire album.  So I decided I wanted to make a completely original blues album,” said Bonamassa.  “I’ve really had to push myself to make everything I do better than the last project.  I know the fans expect it.  And I feel like I owe it to the fans to give them an original record after all these years.”

To prepare for the record, Bonamassa took 2013 off from releasing any new studio material, a rarity in the tireless bluesman’s career, and instead spent time in Nashville writing with Jonathan Cain (Journey), known for hits “Who’s Crying Now,” “Open Arms,” and “When You Love A Woman;” James House (Diamond Rio, Dwight Yoakam, Martina McBride), and Jerry Flowers (Keith Urban).

“The writers really inspired me, and having access to really great lyricists and songwriters made it such a great experience,” said Bonamassa.

It’s an impressive collection – “Oh Beautiful” kicks off proceedings and is a rich power riff rocker.  “Love Ain’t A Love Song”,  “Living On The Moon” and “Heartache Follows Wherever I Go” have more of a funk bent, blaring brass but still heaps of wattage.  “Never Give All Your Heart” and “Different Shades of Blue” are slow burners and for me have huge appeal (you can see a clip of the latter below – judge for yourself).  There’s no question as to Bonamassa’s guitar prowess – it’s on full display here.  Soulful, unflinching and atop the obelisk.  “I Gave Up Everything For You ‘Cept the Blues” is more twelve bar with a rolling piano.  The closer is “So What Would I Do” which is another high point – intense and pleading, the playing here is again exemplary.

Different Shades of Blue is another triumph for this award-winning artist.

Bonamassa has also announced Australian tour dates to coincide with the new album.  Kicking off in Sydney on September 14, the tour finishes up a week later in Perth on September 21, after performances in Adelaide and Melbourne.  Tickets to all shows are on sale now.

The new live show will offer two band line-ups with Joe Bonamassa dividing the show in half, offering audiences both a full acoustic and full electric set.  This will be Bonamassa’s first time performing a full acoustic set in Australia for local audiences.

Together they will run through an hour of the celebrated signature acoustic performance from Bonamassa’s Vienna show, treating the audience to a textured unplugged experience.

Bonamassa will then shift into electric mode for the second half of the show, which will feature his acclaimed touring band: Rojas (bass), Tal Bergman (drums), and new touring keyboardist (and fellow Black Country Communion member) Derek Sherinian.

Tickets on sale now, for more information, head to the above link.