Read our review of day 4 of Fayettevilleroots festival 2016

The festival had slowly built, from Thursday evening, through a big Friday agenda and an even longer Saturday into the early hours of Sunday.

Today (Sunday proper) was a shorter program with an earlier finish.   The Main Stage doors would open at 2pm and host Hubby Jenkins, Smokey & The Mirror, John Moreland, Hayes Carll and Shovels & Rope.

The day began sluggishly. It wasn’t just me.  At opening time, the crowd was sparse and pretty quiet, plenty of 16oz coffee cups being toted around.  I had met Vern and Bill in the foyer a couple of times and we began an earnest conversation about me attending the Kerrville Fall Folk Festival next weekend.  (This is the little brother/sister to one of the largest and longest festivals in the US – Kerrville Folk which extends over two weeks!). Now Kerrville Texas is just southwest of Austin and I would have to consider the logistics of getting there, but more importantly, getting back to Kentucky for my Chris Stapleton show in Louisville KY.  Food for thought.

That reminds me. When I was here last year, I met some great people and this time the connections seemed to grow enormously.  Here’s just one example.  During the dinner break last night I met Steve, who has moved here from Louisiana.  Now we talked about many things Louisianan and music.  Later on, we hooked up on Facebook and he messaged me to say that he had some musician house guests at his place (Clay Parker and Jodi Martin) who knew me from an album review I did on Addicted To Noise.  Now Clay and Jodi had played a show in Fayetteville a couple of nights before (not part of the festival) and I was so disappointed I didn’t know about it – I would have loved to meet the pair and catch them live. (By the way, you can read my review of their EP here).

Brooklyn’s Hubby Jenkins was one of three core members of The Carolina Chocolate Drops (the others being Rhiannon Giddens and Dom Flemons) who are each creating their own careers.  Hubby is a Grammy winner and Americana nominee for best instrumentalist – he has released a self-titled album and continues to contribute widely both in terms of playing and music education and heritage.

Hubby’s set was quite different and thoroughly charming.  He started with a traditional old-time instrumental medley and then asked the audience to choose one book of four from which he would read an extract. From a show of voices, he read a paragraph from ‘Deadwood City’ and then, at the end of the piece, posed a choice for the audience to choose the character’s next actions.  Another song.  Another reading extract.  Like a choose-your-own-adventure.  It was a good way to crank up the crowd which was growing slowly.  The playing and musical education  I found to be fascinating.  The set included ‘Little Log Cabin in the Lane’ and a wonderful version of Bukka White‘s dramatic ‘Parchman Farm Blues’. 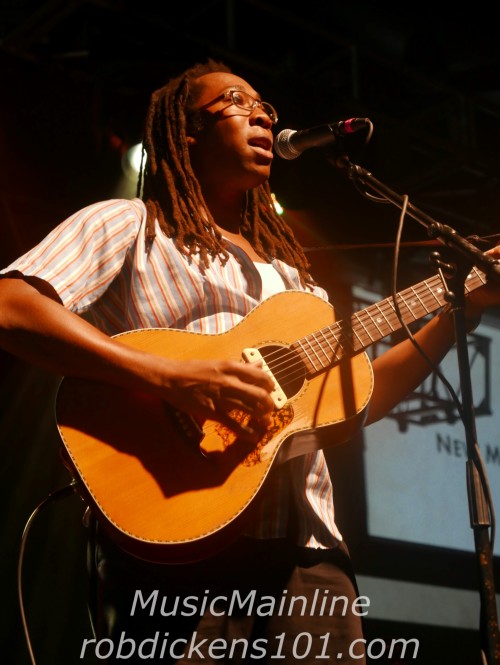 I eventually caught up with Hubby back stage and his knowledge and understanding of music traditions and soci0-political history very impressive.

I got back to the Main Stage to see the end of the performance of Smokey &The Mirror.  Now, I have to say these guys, Bernice and Bryan Hembree, the music organisers of the festival, are amazing.  They have built this festival up, the line-ups continue to be first rate, the organisation smooth and the vibe and sense of music community that they encourage is palpable.  Personally they have been so welcoming to me and I thank them. 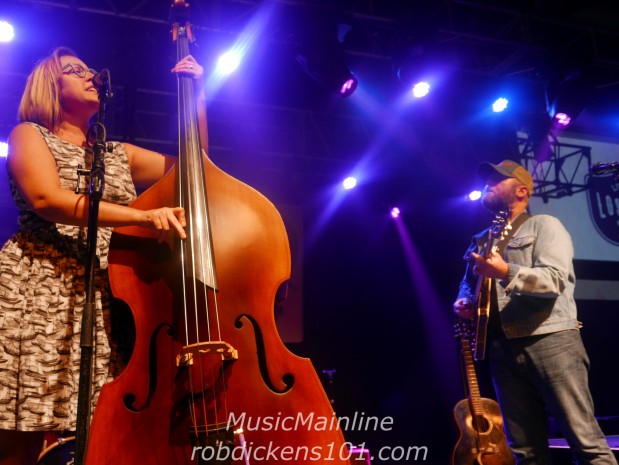 I was able to catch most of John Moreland‘s set – I have written about him many times and again was caught up in his resonating voice and intense lyrics, particularly ‘Hang Me In The Tulsa County Stars’, ‘American Flags in Black and White’, ‘You Don’t Care For Me Enough To Cry’ and ‘Cherokee’.  He was a big hit at last year’s event and was invited back because of that.  Moreland provides us with one lesson – the triumph of one man, one acoustic guitar in a large auditorium and in front of around 1,500 people – the strength of the songs and the rich voice provide a purity unsullied by gimmicks or complexity or unnecessary adornments.

I finally get to see Texan Hayes Carll next.  An alt. country feature for many years, highly regarded and with around six albums to his credit, with the last three really capturing people’s attention – Trouble In Mind (2008), KMAG YOYO (& Other American Stories) (2011) and 2016’s Lovers and Leavers.  Tonight he was part of a trio with a light drum kit and a pedal steel/electric guitarist.  He has a casual and amusing stage presence, like he’s talking to folk on his front porch.  He played at fayettevilleroots three years ago and has spent some in Arkansas (at school) which ‘sucked’.

The songs included ‘Bad Liver and a Broken Heart’, ‘Sake of the Song’, a song off the recent album ‘Good While It Lasted’ with acute observations, the excellent slow ballad ‘Arkansas Blues’, the rolling, talking country blues of ‘Bible on the Dash’ and he closed with ‘Chances Are’ (which Lee Ann Womack recorded).  I was won over and I need to add some Carll to my record collection pronto.  He will also be playing at Bristol’s Rhythm n Roots Reunion in two weeks, so I get to see him again in a different setting.

Shovels & Rope (Cary Ann Hearst and Michael Kent) hail from Charleston South Carolina and burst on to the scene with O Be Joyful (2012) and followed up with Swimmin’ Time (2014) and there is another one out this October – Little Seeds – which coincides with the birth of their daughter.

They form a powerhouse duo of drums, electric guitar, keyboard, effects and associated percussion devices.  They swap instruments as easily as passing the plate over the dinner table.  The music is a highly individual and high-octane take on roots music and derivations.  A late start due to sound problems meant a late finish to the set, but no one seemed to mind as they watch the force-of-nature set unfold – ‘Birmingham’, ‘Keeper’, ‘The Devil Is All Around’, a slow burning, soulful ‘After The Storm’, ‘Lay Low’ and an incendiary version of ‘Swimmin’ Time’.  It looks like the set list is pretty pliable as the couple seem to have brief exchanges about what they (or they think the crowd) want(s).  The new songs on display sounded terrific.

So fayettevilleroots festival ended on a huge wave of passion and blistering energy. 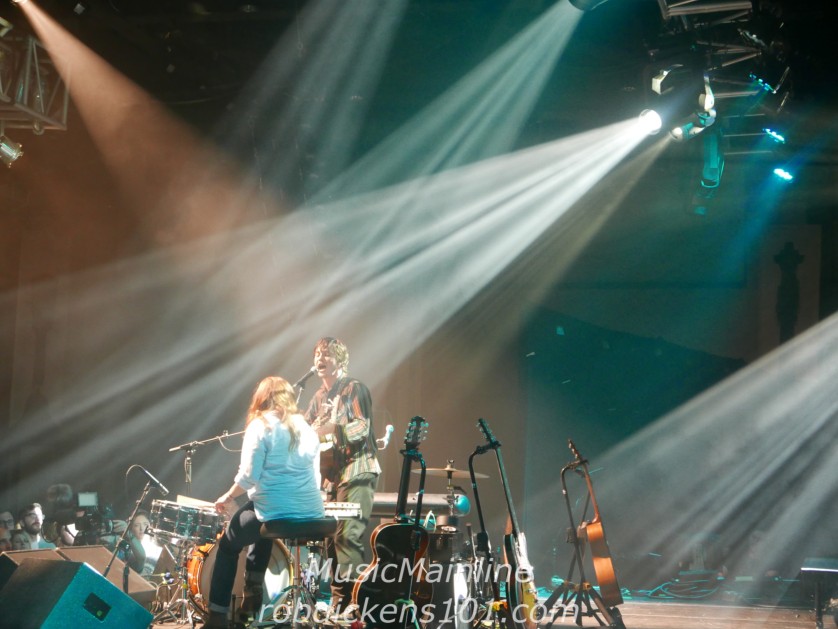 Time for a few goodbyes, before walking down to the iconic George’s Majestic Lounge for a festival after-party featuring Levi Parham.  Well, it turned out to be not much of a party given the small number of attendees.  But there were some new friends I had met the night before and Parham put on a great show.

Levi Parham self-recorded and released his first album An Okie Opera (2013), to local acclaim as one of Oklahoma’s top Americana singer/songwriters.  For the follow-up, he travelled to Nashville to record Avalon Drive (2014).  Since then, he has signed with Music Road Records for his first studio full-length release, These American Blues.

His music has touches of influences of The Band, Woody Guthrie and Lightnin’ Hopkins.  If that sounds interesting to you, well look out for this talented singer-songwriter.