On the way to the festival, some serious discussion underway.

Cory Branan provides anthemic songs, magnetic choruses, wry and sharp lyrical observations and dominant guitar work.  Sometimes the world-weariness and maturity leaps out.  His latest album The No-Hit Wonder is gripping and was one of my top twenty albums of 2014.  The album is both a celebration of the undefeated underdogs of the world and a coming to terms with the cards life has dealt you.  And it’s a lot of fun.  I saw him perform at the Americana Festival last year – a somewhat ramshackle set structure (most of the songs were based on crowd requests), flashing smile, sharp humour and a large stage presence.

Today, he was amped up and cranked out “Sour Mash” to open.  He is all movement and energy.  Like a tiger caged.  Highlights were “Tall Green Grass”, “Come On, Shadow”, “Freefall”, “Imogene” (requested by his wife) and a new song with great power about the worst maritime disaster in U.S. history.

He is a brilliant and edgy performer.  His songwriting is sharp and profound, requiring effort from the listener which will be well rewarded.

The presence of his infant son provided a delightful bonus to an all-too-short set.

As well as Ben Miller, Ben Miller Band includes Scott Leeper and Doug Dicharry.  They’ve been together for I guess a decade, originally from Mississippi and this is some power Southern trio.  They make the most of everything they can find – electric spoons, washboard, cigar box guitar, whistles.  Dicharry’s playing a one string wash-tub bass and I can’t comprehend the sounds he gets from it.  The sound is power delta and swamp.  A seething version of the classic “St James Infirmary” with Leeper switching to trombone and blowing up a storm was memorable.  “Cuckoo” is a full-bore epic of rhythm, feeling and improvisation.  The closing song, a version of the traditional work song “Black Betty” was inspired.

Smokey & The Mirror are husband and wife duo Bryan and Bernice Hembree, originally members of folk/bluegrass trio 3 Penny Acre.  The Hembrees have a massive footprint on fayettevilleroots festival, a dynamic duo that is a music force of nature at this festival and in the community generally.  How they had time to prepare for their performance today, only they would know.

Joining them on stage were regular compadres Ryan Pickop on drums and Terry ‘Buffalo’ Ware (John Fullbright’s guitarist).  Highlights were “Highway 71”, “Oklahoma Nights” and the dramatic and biting “Tulsa 1921”.

The response from the crowd was terrific and the feelings for this live-wire couple evident. 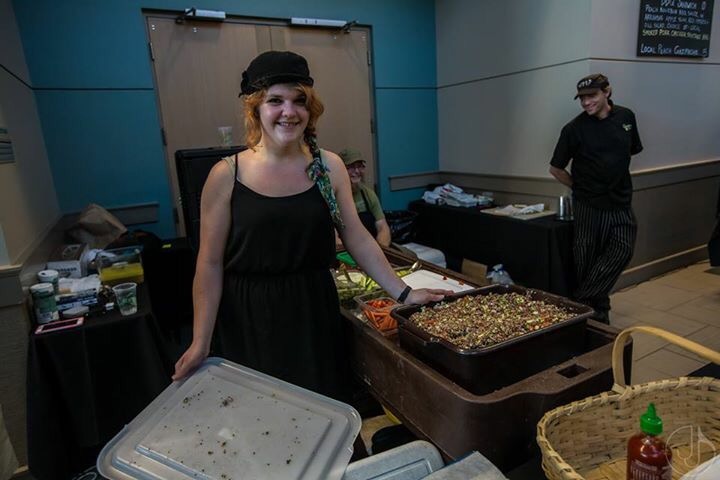 The Shook Twins are based in Portland Oregon and they brought a new and refreshing musical perspective to the festival – certainly the first beat box sighted!  Folk music blended with indie rock, the twins harmonise beautifully and the arrangements are very atmospheric and percussive. 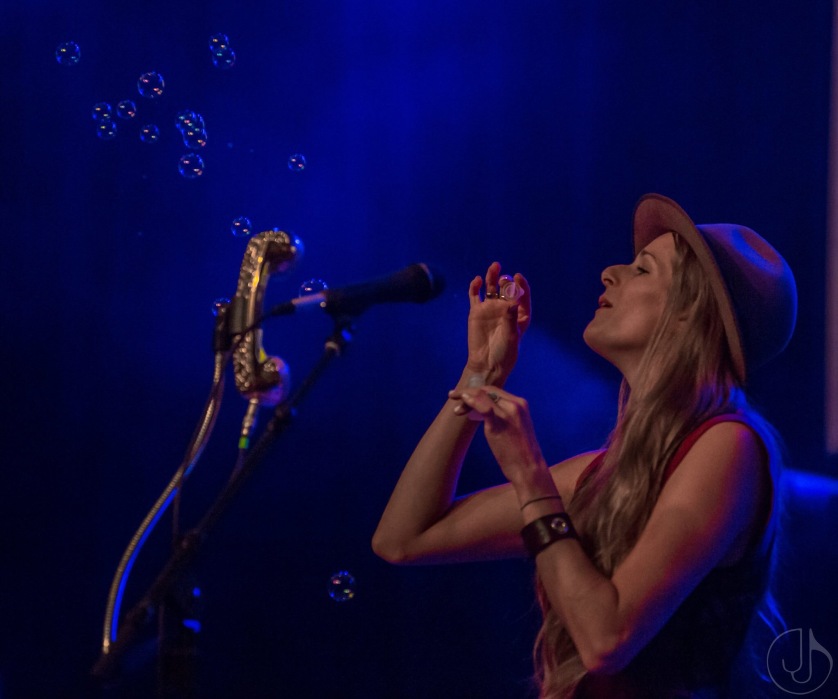 This was a treat.  I love the solo music of Sara Watkins, Sarah Jarosz and Aoife O’Donovan and the work that Sara W. has done with the band Nickel Creek.  So how good was it going to be to see the three together under the moniker I’m With Her?  Answer, captivating and delightful!  The three highly talented girls put in a set which was a mixture of gospel, folk, and Americana.  Hard to pick highlights as the whole set was outstanding.  Jarosz’s “Run Away” was taken to a new level, bringing watery eyes to many on-lookers, “Hornet”, “Captain’s Clock” and Jim Croce’s “Walkin’ Back To Georgia” are worth special mention.  Three sets for the price of one, how good is that!! 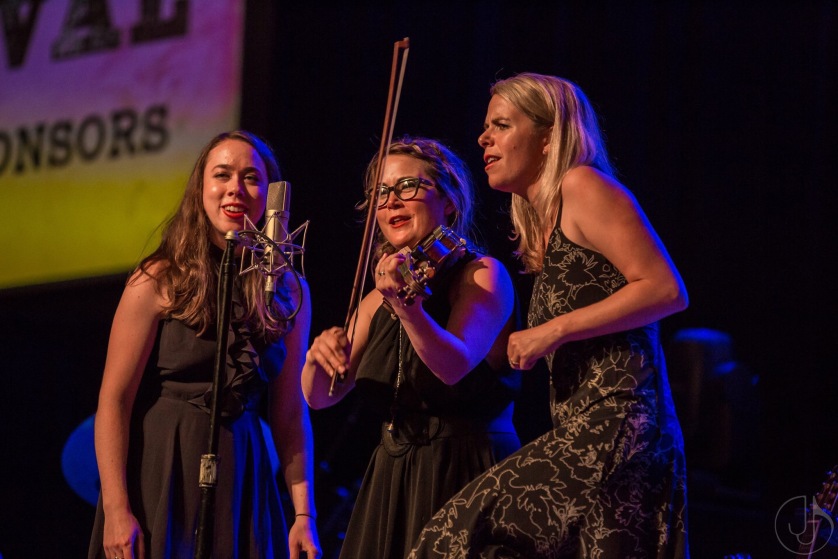 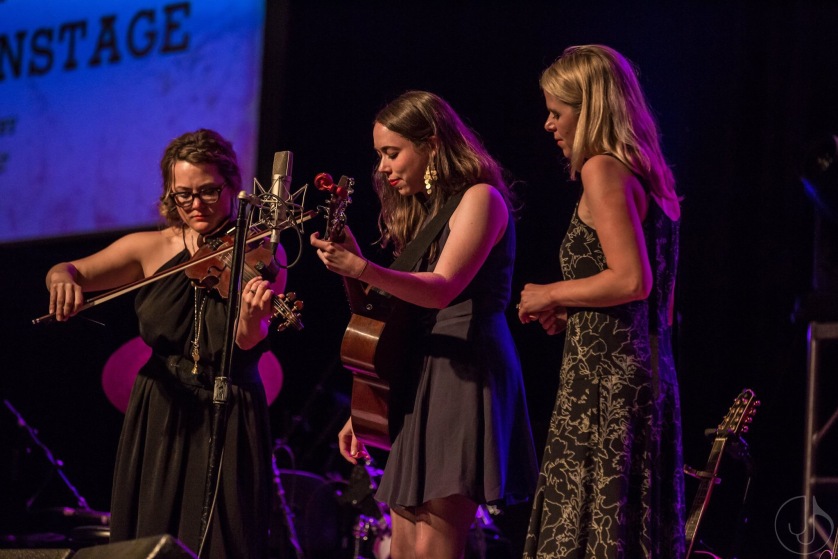 I saw the band live in Raleigh North Carolina at the Wide Open Bluegrass Festival in 2013, just after the iconic and traditional bluegrass outfit Del McCoury Band.  The contrast was striking – two outstanding outfits in the same music space, but on the surface poles apart.

Tonight was special.  I was in the front row so I missed nothing, neither did my friend Jim Jacob and his camera.

Punch Brothers don’t play music as we know it.  They transcend it.

They are brilliant individually and, as a collective, unfathomably good.  They love to mix genres up and spit them out – jam grass, folk, chamber grass, classical, indie rock and vocal harmony material.  Their musicianship is audacious.  They cast a spell tonight that had the crowd mesmerized.  Standing ovations, the first encore of the festival.  I am writing this a little over an hour after the set, which contained around half the songs from The Phosphorescent Blues, and I am still stunned by its brilliance.  One of the best shows I’ve ever seen. 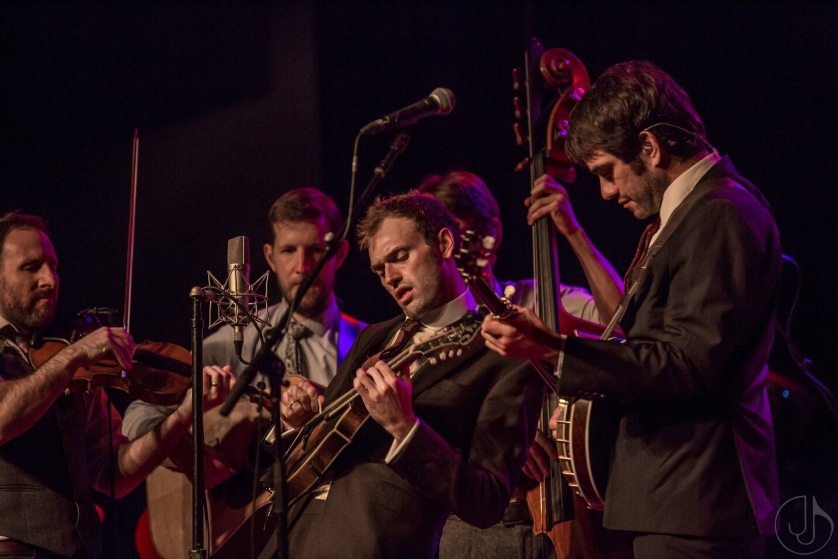 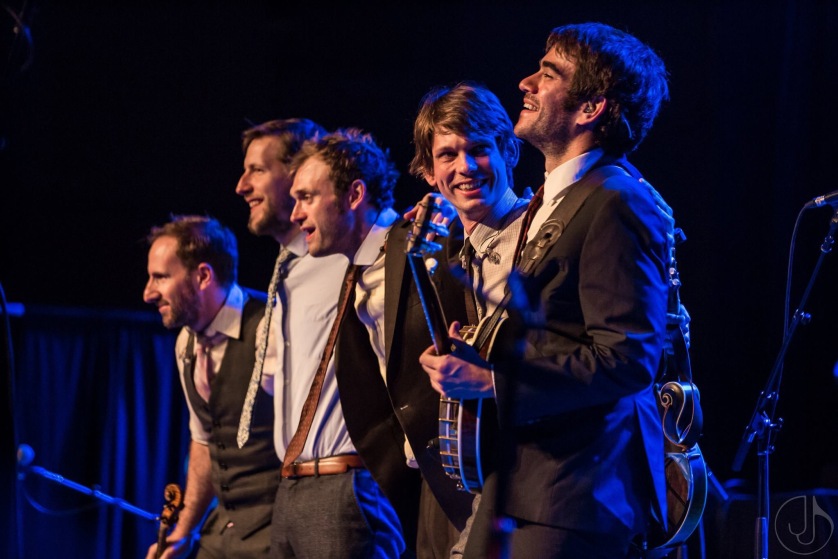 So, the second day ends on an incredible high.

Time to get some rest, there’s still another mouth-watering festival day to go.