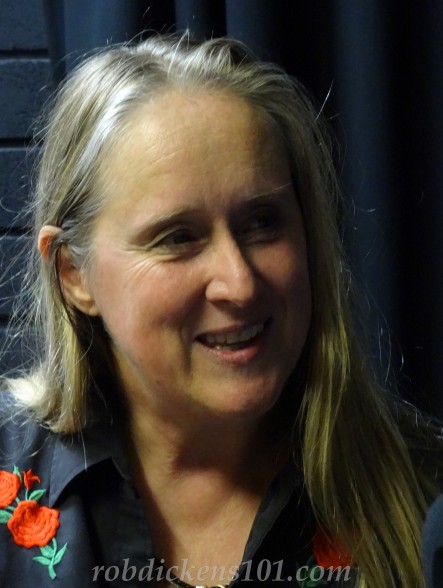 Australian Blues guitarist and singer, Fiona Boyes, has been variously described by reviewers as a ‘musical anomaly’, ‘Bonnie Raitt’s evil twin’, or simply as ‘scaring the hell out of me’.

Boyes became the first woman and non-American to win the International Blues Challenge in Memphis.  Mississippi Delta and Chicago blues giants, such as the late ‘Pinetop’ Perkins and Hubert Sumlin, have described her as one of the best women guitar players since Memphis Minnie, recorded on her albums, and shared stages with her at international blues festivals.

She writes, sings and plays just about anything in the Blues realm with passion and authenticity.  It is also her immersion in the wide musical and historical traditions that make up the Blues and her deep love of the art-form itself.

In 2014 Fiona was the first Australian blues musician to be invited to play at a large-scale and prestigious USA traditional acoustic festival ‘MerleFest’, followed by an extended seven-country European tour.  Constantly touring, Fiona divides her time between Australia, North America, and Europe.

Boyes’ brand new release is called Box & Dice featuring an odd assortment of electric guitars and other instruments, with a strong concoction of growls, swamp and voodoo.  From what I’ve heard, Boyes continues to joyfully explore the music she loves with recent acquisitions such as a cigar box guitar and a rare ResoLectric Baritone guitar which provide vibrant new textures.

You can buy the album here or catch some of the new songs here.

I was in Launceston, Tasmania last month and was lucky to see Boyes perform twice on the same day – a show at the local Royal Oak Hotel and a guitar workshop just beforehand.

Local community station City Park Radio’s Dan Stephens was also at the workshop and here is an edited extract of Dan’s interview with Boyes.

Welcome to fabulous blues guitarist Fiona Boyes.  Are you on the back of a tour now?

Thanks for having me.  I’ve been on the road pretty much since late February with a series of different festivals and things starting with Cobargo [NSW] Folk Festival and Port Fairy … just perfect timing for the release of the new album Box & Dice.

Just out this year?

Yes.  I’ve done a lot of moving around.  I’ve done a lot of moving house.  No wonder I have trouble in working out where I live these days!  At one point my husband Steve and I had lived in ten different houses in eight years in two different countries, so he was threatening to move again and I thought I better get an album out quickly otherwise I’ll have to start packing boxes!  So I recorded it in December, in the middle of December for a couple of days and mixed it early January.

I read somewhere you were given the keys to the City of Clarksdale in Mississippi.  Is that right?

I have indeed got the keys to the City of Clarksdale.  Pride of place in my musical collection.

It was a wonderful experience.  That was a part of, I played at the Juke Joint Festival and I was very honored to have a chance to play there as there’s a focus on local artists…so to be able to play as part of that downtown Clarksdale festival was a great honour and I was invited to a reception, there’s a reception at the beginning of the Juke Joint Festival just called the Welcome Home Aussie Day event because over the years there’s been a group of Australians there, Australians often figure highly in visitor numbers and so it’s in recognition of that.

Doesn’t Morgan Freeman own a club in Clarksdale?

Yes he did.  I actually played that club.  I’m trying to think of the name of it [Ground Zero].  I played it with a local musician called Stan Street who is a wonderful folk artist and he and his wife Dixie Street have the Hambone Gallery there.

You’ve actually answered this question at this workshop, but can you just again for our audience, talk about the impact of your blonde hair?

Bit of a librarian?

I have been told variously I look like a girl next door that we didn’t expect that voice to come out of you.  Yeah and also I’ve been told I smile too much to be in a blues band.  Blues isn’t necessarily a visual thing, that’s the whole thing I think.

As long as you’re enjoying yourself

Yeah l I feel very blessed to have the opportunity to do what I do.  In Mississippi and Alabama, there’s an assumption there’s all black players, but of course there’s lots of white blues players as well, and some very influential white players…Lightning Malcolm and Jimbo Mathus and various people like that, and there’s also mixed bands.  Dixie Street who I just mentioned has been playing with some of the older players, she’s a fine drummer, so you often get these mixed conglomerates. It’s not as separated as people think.

I’ve noticed in the last few years the older I get the more I’m getting into this style of music.  It was rock n roll and I was kinda into songwriters before the old guys like Mississippi John Hurt, these guys from way back when.

Well you see this is what I started with.  I think a lot of people come to blues from rock or pop backwards.  They fall in love with Eric Clapton as a guitarist and then whoever.  For me the opposite happened.  My first introduction to blues was early pre-war blues and so my first exposure was quite raw, documentaries of the 20s and 30s and the early country blues players.  So that’s actually my background.  I started to, and still do, play a lot of solo acoustic stuff which is more influenced by people like Mississippi John Hurt, Big Bill Broonzy and Tommy Johnson more than Robert Johnson I would say for myself.  Memphis Minnie is influential to me in as much as there’s not many women you know.  It’s strange to me that blues is considered very male- dominated music and there’s very few women guitarists.  Memphis Minnie certainly was a very influential guitarist in her own right, in her generation so I always like to fly her flag a little.  I think some of the women got a bit lost.

Think Lucinda Williams did one of here tunes on an album not long ago?

The crazy thing is, and this is not in anyway to detract from heroes and from people who idolize Robert Johnson, but when you look at his output for example …you know Minnie recorded so much more material and she was an influential songwriter and she was innovative as a guitarist.  She started off as a finger-picker to playing resonator instruments, she pioneered the use of electric instruments when she moved on to Chicago and was influential in the beginnings of the Chicago blues scene and a lot of her songs were covered by bands and people who went on to be much more famous.  “When The Levee Breaks” is actually a Memphis Minnie tune.

To get back to that comment earlier, was that for me in many ways I was reaching forward then to electric blues because my first contact was that and I started off as a self-taught acoustic player and then I had an opportunity to join a band, so I borrowed an electric guitar which I had not much idea what to do with, because the nature of an acoustic player is that you are trying to be a one-man band …a one-person band.

Was that The Mojos?

So that was The Mojos and, you know, your role as the guitarist in a band then means that you’re trying to play more straight rhythm guitar and more straight single-note solos, so over the years I’ve found it very interesting to explore different regional styles of blues.  The Mojos with that particular band instrumentation with having a piano player and a drummer who was very interested in New Orleans’ swing beats meant that we explored those kind of textures.

Yes!  I love the idea that in Texas and Louisiana there is a lot of twang factor in the blues and it is not unusual to have fiddles and I find it interesting as a songwriter particularly too, looking for something where you want to have your material identifiable as the genre it belongs to.  So there’s still a sign post to say this is a blues song, or this is a roots song but then within that you can blur the genres a little bit so that you have familiarity and yet a little bit of a surprise or bit of innovation or a sense of putting your own mark, your own stamp on it and I love that tension between innovation and tradition and respect the traditions.