Luke Winslow-King comes in many guises.

There’s the front man of the Luke Winslow Band, live, playing his heart out, collecting tips, working the room with an easy charm, eking out a living in New Orleans, a city full of music and opportunities, but also full of amazing musicians all trying to make a mark.

There’s the beautiful slide guitarist, able to fill in more than capably as a side-man with the likes of Little Freddy King, grinning and handsome, looking like a cross between Gary Cooper and Kevin Costner.

Then there’s the recorded version.  On his new release Everlasting Arms (Bloodshot Records), he is looking sombre and traditional, a man and his guitar whose influences run deep through the Mississippi Delta and all the way to his new home, New Orleans.

He’s coming to Australia and he’s really worth seeing.

Tour dates are as follows:

On the heels of his debut The Coming Tide in 2013, King is as hardworking a musician as they come.  Subsequent tours in the United States and overseas with his singing partner (and wife) Esther Rose King and a mutating band landed the group in front of larger audiences while sharing the stage with the likes of Jack White, Pokey Lafarge, Taj Mahal, Chris Thile, and Rebirth Brass Band.

Winslow-King is a student of the arts and an ambassador for New Orleans’s rich and colorful culture.  As a teen he attended the Interlochen Centre for the Arts near his hometown of Cadillac, Mississippi.  Later he studied music theory at New Orleans University and eventually received a scholarship to study music abroad in Prague, Czech Republic.

Following a chance 2001 move to New Orleans after becoming stranded when his tour van was ransacked, Winslow-King’s education continued as he was schooled on the job from frequent, skin-thickening gigs on Royal Street, club performances at various spots along Frenchmen Street, and pick-up/recording sessions with local standouts including John Boutte, Roberto Luti, “Washboard” Chaz Leary, Little Freddy King, and George Porter, Jr.

In 2013, LWK was nominated as best male performer by New Orleans’s influential Offbeat Magazine, alongside Dr. John and Boutte. 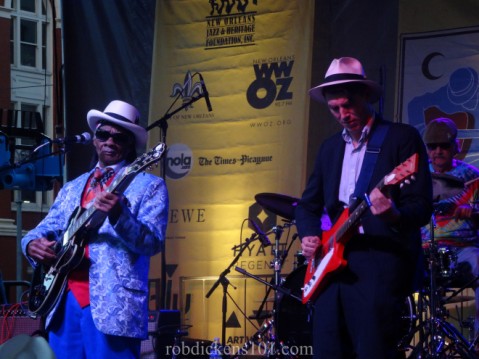 Everlasting Arms is a wonderful mix of songs and instrumentals.  “Cadillac Slim” is a rolling Fats Domino piano tune, “La Bega’s Carousel” is lively calypso and “The Crystal Water Springs” is grungy Delta blues.  Winslow-King starts to strut his guitar prowess on the captivating and creeping “Interlude (As It Goes)”.

“Last Night I Dreamed My Birthday” is a gentle ballad with horns, building to a climax with feeling through King’s urgent slide guitar.  “Domino Sugar” has a real New Orleans blues sound, while the very short “Interlude II” is more a Delta blues signature.  “Home Blues” is classic Dixie jazz but with resonator guitar quietly adding an extra ingredient.  “Traveling Myself” is a skeletal foot-stomping, authentic blues beauty to close off the album.

Everlasting Arms was produced and arranged by Winslow-King and all songs were penned by him.  The album builds on previous efforts, but with a wider scope, ensuring he doesn’t allow anyone to pigeon-hole him.  He is clearly at the helm of a career which is fascinating to watch.

Luke Winslow-King comes in many guises, and I like them all.

Here’s a clip of “Traveling Man”